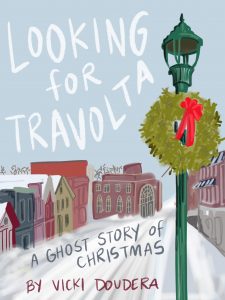 State Representative Vicki Doudera’s has crafted a wonderful novella with a timeless message just in time for the Holidays. And all proceeds benefit United Midcoast Charities and Midcoast Habitat for Humanity.

Looking for Travolta: A Ghost Story of Christmas features Millicent Plenty, a scheming, stingy Scrooge of a woman who makes everyone around her miserable. Hard-working, down-on-her-luck waitress and mother of four Dena Pease bears the brunt of Millicent’s abuse.

Doudera, who represents District 94, including Camden, Islesboro and Rockport, retells Charles Dickens’ holiday classic, A Christmas Carol, in present-day Maine. Residents of the coastal town of “Canterbury” are in the holiday spirit. They’re shopping on the bustling streets and sipping cocoa in the local café. But they’re also keeping a close eye out to catch a glimpse of a celebrity who lives on a nearby island: the actor John Travolta.

Doudera loves Charles Dickens’ story in any variation. She appreciates its beautiful language, its theme of redemption, and its invention of Christmas traditions as we know them. Her twist on the tale came about because, for years, she has been “looking for Travolta” during the holidays.

“For close to 30 years, John Travolta has had a home on Islesboro,” Doudera said, referring to the island a short ferry ride from Lincolnville, “and during the week before Christmas, everyone sees him in Camden and Rockland, shopping or eating or having a drink someplace. I’m out and about every December but never seem to be in the right place to spot him.”

Doudera said that the classic story and her quest to see the famous actor were “both in my head at the same time, so this story just sort of came to me.”

As with Dickens’ character Scrooge, miserly Millicent Plenty is visited by her old business partner on Christmas Eve, followed by a trio of ghosts revealing Millicent’s past, present and future. The spirits in Doudera’s tale are characters familiar to fans of Travolta’s movies, and her story has a satisfying, Dickens-like ending.

“Vicki does a masterful job of casting a classic tale onto a coastal Maine community and provides a deeper resonance to its ageless message,” says John Viehman, Executive Director for United Midcoast Charities. “We’re delighted she’s chosen UMC as one of the beneficiaries, especially now when there is such an alarming demand for the most basic services here in Knox and Waldo counties.”

Tia Anderson, Executive Director of Midcoast Habitat for Humanity, says “Vicki has a huge heart for Habitat! We are thrilled she has created this opportunity for others to enjoy her latest work and support the needs of our community.”

Doudera’s book is available on Amazon in a Kindle version for $4.99 and in paperback for $24.00. Net proceeds will go to the charities. Readers who send Doudera a $50 check will help the charities even more. These “holiday heroes” will receive an autographed copy of the book and an invitation to a special Zoom party on December 21st. Partygoers will discuss Looking for Travolta, Charles Dickens, and the craft of writing in general.

“Even with the cost of shipping, the nonprofits will receive more than $40 per book at that special price,” Doudera said, “and given the need out there, every little bit counts.” 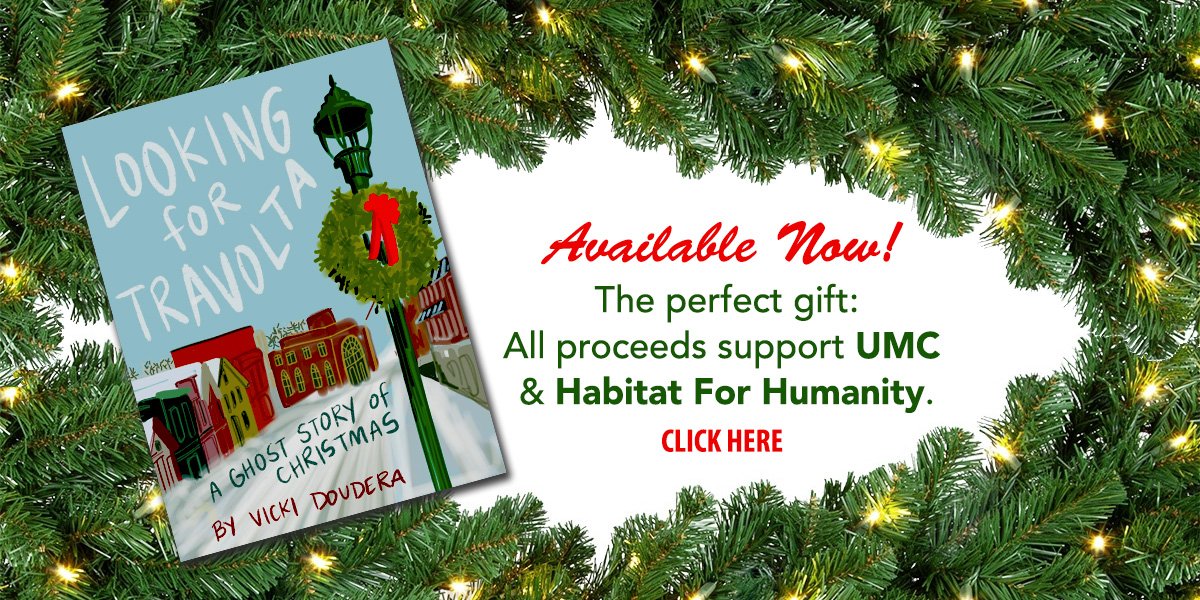