Rockland Area District Nursing Association founding nurse Eliza Steele officially retires. Her extraordinary 40-year commitment was recognized during a “Mammoth Retirement Party,” capped by the naming of a city street in her honor. She also received numerous gifts, including a new car and television set. 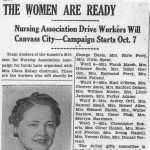 Rockland District Nursing Association was founded in 1929 under the auspices of the Red Cross. With the collapse of Community Chest funding in 1940, local residents stepped up to continue this important nursing service. During WWII, RDNA nurses were the face of health care at home while physicians were away at war.